What do you do when Ryanair has black Friday deals? Exactly, scrolling until you find the cheapest flight as possible. This time it seemed to be the country of zloties, vodka and an incredible dark history. Warsaw, here we come.

The first word that comes into my mind when I think back of this trip is: grim. It was absolutely grim. In some parts, outside of the city centre, I was happy that I was walking with Adam by my side. I guess the time of the year (December) didn’t made it look better. All the trees looked naked, you heard crows everywhere, and it got dark at 15.30 / 16.00. And I mean, totally dark. It reminded me a bit of the Disney movie snow white, when she is running away and ends up in the forest before she finds the little village with the seven dwarves. I’m sorry. But grim or not, after all, we had a good time there. It is really cheap, there are a lot of bars, there are many choices (more than 100!) of vodka and if you are into history, it is definitely your place.

During the second world war, Warsaw was totally off the map. The Germans destroyed this place for 85 percent, after the revolt of the Polish people. Nowadays, the Polish people are still proud of the revolt of their ancestors. The years after the second world war people went back to Warsaw to live there again. They rebuilt the place how it was before it got destroyed. And that is how the Old Town of Warsaw is what it is today. Normally people draw a place from the real world into a painting. Well, this was the other way around, people built the place exactly as it was looked in paintings and pictures from before the second world war. So today you can have a walk through Old Town with the feeling those cute and coloured buildings have been there for years and years.

The Old Town exists of cobbled streets, a lot of restaurants, street musicians, and cosy little markets. It is absolutely one of the highlights of Warsaw.

Close to the central station the neighbourhood is totally different than Old Town. This neighbourhood is the city centre of Warsaw. You will find the ‘Palace of Culture and Science’ here. When we were there, there was a lovely market inside. It is a big Soviet building and it is higher than other buildings, which Polish people are not keen on. Next to this massive building you will find an extraordinarily designed shopping mall, some fancy skyscrapers, a few shops and fast food chains.

Praha is an alternative district and there seems to be a lot of street art, small coffee shops and apparently a local market. We did not go there because the hostel host told us that it was a dangerous area in winter time. But we would check it out if it was summer. 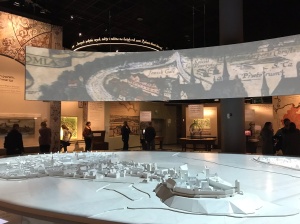 We visited the Polin museum. This museum is about the history of Jews. This was the first thing we did, which I would not recommend. The pictures and little films in this museum hit me from the beginning. I could not get the view out of my mind the next days. It is definitely worth visiting and really impressive, just do it after you explored the rest of the city. A grim city like this and this dark history that I had made me feel the war still.

The Earth Museum is a bit different. It is one hall with a big exposition and it looks if you are in the home of a person, which makes it interesting. A good thing with this museum is that it is free on Sundays. So, we went on a Sunday, and we were the only people visiting. We had to cross a small bridge in the woods on the way to the museum, the trees, crows and bins which were chained to a street light made this route also quite grim. When it turned out that this museum was in an old house, with one employer (a big Polish guy) and the cracked door, I felt like we were in a horror movie and they will cut my organs out of my body and sell them on the black market. Okay, I am a little bitch, but it was creepy.

It was fun though and this museum was interesting. If you have time you should check it out, for free on a Sunday, and also maybe in summer time so the route is nice and cosy.

Like I said before, Old Town is interesting because this district is rebuilt, while it doesn’t feel like it is rebuilt. It is cosy and it has a nice atmosphere. They sell a lot of hot beers, which I never saw anywhere before, it has small markets, restaurants, coffee places, pubs and a lot of street life.

Drink vodka in one of the many shot bars

In many bars, you can have a cheap vodka with loads of choices. In the city centre, you won’t struggle to find a bar since Polish people are one of the biggest drinkers in Europe. It has a big drinking culture. Order a vodka, shot it and make friends with the Polish people in this bar. The average price of two beers and two shots of vodka is 5 euro. Not bad, is it?

We stayed at hostel Patchwork, which is a cheap hostel in the middle of the city centre. It has his own bar and a lot of bars around the hostel. The staff are really welcoming and will do everything to help you. The common roam is cosy and there are always people to talk or play a game with. It is a good hostel to make new friends and explore this city with somebody together.

I don’t think food was that special in Warsaw. Local food are dumplings, which we bought twice at a food market in Old Town. We found a hamburger place in the city centre and we ate in Podwale 25, located Old Town, which I would recommend if you want typical Polish food.